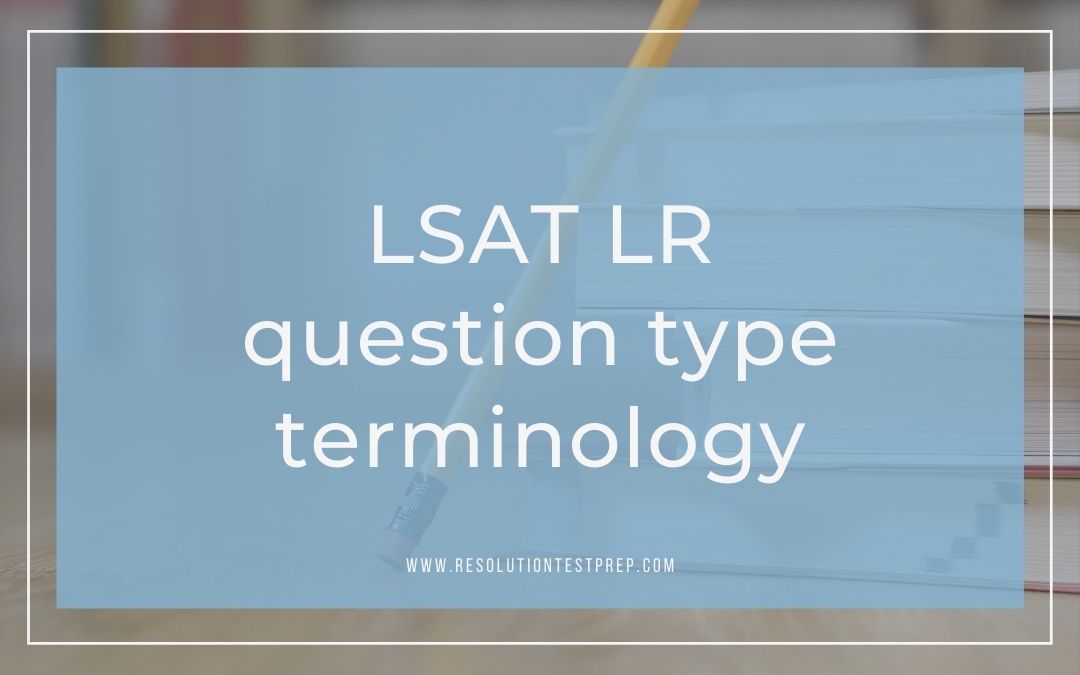 Ever get confused by the different terminology that’s out there about the LSAT?

I undertook an interesting (and surprisingly time-consuming) project recently creating a concordance of Logical Reasoning question types by publisher. What this means in everyday English is that I looked through four prominent study materials (Powerscore, The LSAT Trainer, Khan Academy, and The Loophole in LSAT Logical Reasoning), and I attempted to create an organized list of who calls what by what name.

For example, Powerscore refers to Must Be True questions, but LSAT Trainer calls them Inference questions, Khan Academy calls them “Identify an Entailment”, and the Loophole in LSAT LR splits them into either Inference or Fill-In questions.

This might sound like a pedantic exercise, but I actually learned a lot about the LSAT by examining so closely how these different materials carve up the Logical Reasoning world. I want to share those insights with you here.

But first, here’s a link to the spreadsheet I created to organize the information.

Also, please note that this post isn’t designed to be an introduction to question types. It presumes you have a strong foundation in LR already and are looking to up your game. If you’re looking for something more introductory, try this blog post instead.

I chose to use some of the most prominent resources for studying logical reasoning. The Powerscore trilogy is considered perhaps the gold standard in LSAT prep. It’s dense, it’s thorough, and because of that, it’s also not for everyone. Mike Kim’s The LSAT Trainer is a good introductory book. It doesn’t include everything but is good on the fundamentals. Khan Academy is a free online resource the only study material created with direct collaboration with LSAC. Its explanations can feel a bit limited at times, however. Finally, Ellen Cassidy’s The Loophole in LSAT Logical Reasoning provides a different take on the section with a more language-based approach to logical reasoning.

The further I got into this project, the more I became convinced that question type labels are limited in their usefulness. They certainly help when you’re getting started in your studies and are trying to learn how to vary your approach depending on what the question is actually asking. But question types can also lead us into over-emphasizing the differences between questions. We can fail to see the connections between the questions, which after all, are all designed to test the single skill of logical reasoning.  In worst-case scenarios, we may even get thrown off when LSAC decides to phrase a question differently or to ask something that doesn’t fit neatly into the boxes we’ve created. (That happened on one of the official LSATs I took. I saw a question stem I’d never seen before, and I had to start from scratch asking myself what they were asking me to reason through.) Nevertheless, here are 5 major insights I had while creating the spreadsheet.

Mike Kim in The LSAT Trainer separates argument stimuli into arguments that require us to be critical and those that do not. The spreadsheet I created takes the best of both of these worlds, separating the stimulus into the following:

(Principle questions got to be especially complicated in my taxonomy project, so I’ve put them in their own section in the spreadsheet. Their stimuli are arguments, however.)

Whether you read the question stems first or the stimulus first, it’s essential to know what kind of stimulus goes with what kinds of questions. You don’t want to be looking for the conclusion of the argument in a Paradox question, for example, because you won’t find one.

Khan Academy’s naming scheme showcases this the best, although it shows up a bit in some of the other publishers as well. In general, your task in a question can usually be divided into one of the following:

To put it simply, knowing your task helps you accomplish it. It’s also interesting that none of the sources I examined use “Identify what weakens/strengthens the argument” or “Identify the sufficient assumption” as their names for the question types. These questions are the ones that have “if true” in their question stem. The “if true” in the question stem means the answers will be bringing in information that’s not in the stimulus. In other words, “identify” isn’t the right word for when we want to find something that’s outside the scope of the original argument. But for the “identify” questions, your answer is right there in front of you.

Seeing how the different study materials name and organize question types gives us a window into the connections that the authors make between question types. For example, Powerscore considers Role of a Statement questions to be a subtype of Method of Reasoning questions. And that makes sense. After all, when we’re asked to name the role that a certain sentence plays in an argument, we’re being asked about a specific part of the method of reasoning in that argument. Most of the resources differentiate between Must Be True and Most Strongly Supported questions, but The LSAT Trainer does not. That helps remind us that our task in both is to find what we have solid evidence for in the stimulus. For many students, getting a little loose on the difference between 100% supported and only “strongly” supported leads to errors. So Mike Kim’s reminder that Most Strongly Supported questions involve the same inference process as the Must Be True questions is well served.

Seeing these connections can help you process your task in these questions in a different way. It helps you understand more about how the LSAT works.

The Loophole in LSAT LR draws a number of distinctions between question types that aren’t really addressed in the other study material, or that are discussed only as extra information about the question. For example, Loophole author Ellen Cassidy differentiates between Classic Flaw questions and Loophole Flaw questions. The loophole terminology is unique to this book, but the concept isn’t. Essentially, the Loophole Flaw questions are the questions that ask you to name the flaw in terms of what the author “fails to consider” or “presumes without justification.” There’s a good drill on that concept in chapter 5 of The LSAT Trainer (available as a free sample chapter here), but Cassidy’s emphasis on these kinds of flaws is helpful since they are so common on recent LSATs.

And finally, Cassidy also differentiates between Must Be True questions and what she calls Fill-In questions. These are questions that have a blank at the end of the stimulus. It’s your job to fill in that blank. Knowing that the other study materials consider these to be the same as the Must Be True questions reminds us that our job is to make an inference, and not necessarily to supply the conclusion of an argument.

Depending on the book you use, you may not be exposed as much to some of the nuances in these questions. Don’t obsess over whether the nuances are enough to really warrant a different question type label. Focus on both the overlap between the questions as well as the nuanced differences.

I had the most trouble on the spreadsheet trying to map out the principle questions across the different publishers. Partly, this reflects disagreement about whether principle questions really ought to be considered separate question types at all.  Powerscore, for example, considers them to be an “overlay” onto other types of questions. In their view, you can have Strengthen questions that attempt to strengthen the argument not with details or facts but with general principles. That would be a Strengthen question with a Principle overlay, in their opinion. You could have a Must Be True – Principle, a Parallel – Principle, and conceivably a Weaken – Principle or any other type of question with a principle overlay. Other prep resources take the principle questions that have shown up most often on the test, and categorize them based on whether the principle is in the stimulus, in the answers, or (rarely) implied but never actually stated.

I’ve always found it hard to put labels on principle questions, and now I know why. It’s probably because being too rigid with the taxonomy here is just not super helpful. Instead, it’s going to be best to just get good at parsing what the question stem is actually asking for, then delivering exactly that. One helpful thing to ask yourself in the process would be where the principle is: in the stimulus, the answers, or implied. Beyond that, I would resist the temptation to put labels on the questions.

My advice to you

As I mentioned above, the more time I spent with this project, the more I became convinced that our goal really shouldn’t be to create the perfect classification system for LR questions. In fact, over-emphasizing question types can prevent us from seeing the connections between the questions. So my advice to you is to use this spreadsheet I created not as a way to over-complicate your studies, but as a way to challenge yourself to see the LR section more as a whole. Notice how the different resources are dividing up the LR world slightly differently at times, but recognize that the fact that this disagreement exists at all is a testament to the fact that these questions have fuzzy boundaries and lots of overlap. Focus on the logical reasoning itself rather than obsessing over the question types, and you’ll do fine.