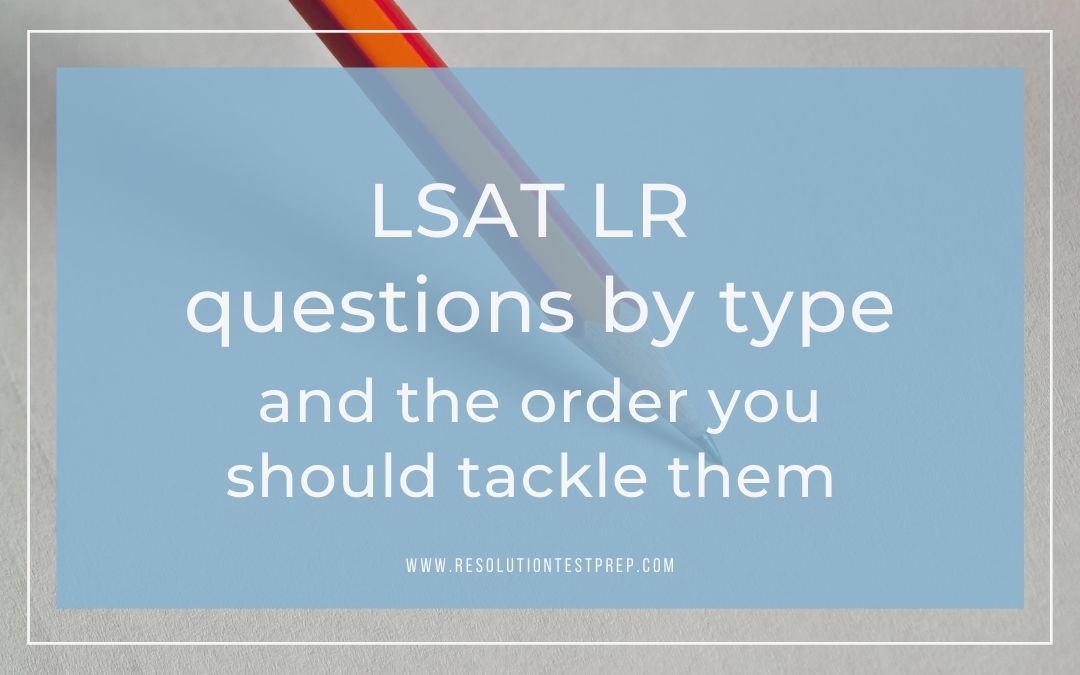 For those students who are getting started on their LSAT prep or are turning their attention from LG to LR, I wanted to share my thoughts on LSAT Logical Reasoning questions by type and the order that you should study them.

A note about relative difficulty: There are easy and difficult questions of each type on the LSAT. I’m not trying to say that a principle question is always more difficult than a weaken question, or something like that. I’m talking here more about the relative difficulty of the cognitive skills involved. If you’re curious, check out Bloom’s Taxonomy – a hierarchy of learning objectives.

While you’ll see slightly different terminology from book to book (check out this post for a comparison), here are the question types I’ll be using in this post, along with a super quick definition of them.

It’s also worth considering how certain of these question types are related to each other, so I’ve grouped them on the basis of the stimulus.

Another group of questions revolve around arguments that aren’t necessarily flawed. Maybe they are, maybe they aren’t, but it’s not your job to evaluate the argument. These questions are less common than the questions about flawed arguments.

These questions aren’t about arguments at all. The stimulus is generally a set of facts. Your task involves drawing inferences from those facts.

The stimulus here presents two pieces of evidence that are seemingly at odds with each other. here’s only one question type with this stimulus type.

In this group of questions, the stimulus presents the viewpoints of two different speakers. The second speaker responds to the first (usually poorly).

The debate format can involve many of the questions in the “flawed argument” section above (flaww, strengthen, weaken, etc). There are also two question types that are unique to the debate stimulus:

Some prep resources consider Principle questions to be just a subtype of other question types (see Insight #5 in my post about Logical Reasoning Question Type terminology). However, since other resources, including resources you can use to drill question types, consider them to be separate question types, I’m listing them separately here.

Generally, these questions involve both general statements (principles) as well as illustrations or applications of the principle. The principle may be in the stimulus or in the answers. Rarely, it could also be unstated but present in the link between the stimulus and the answers.\

When you are getting started with studying for the LR section, here’s the best order to tackle the questions types in. I’ve provided justification as well.

Tackle flaw questions first. They show up a lot on the LSAT, and they are also foundational. You’ll rely on your flaw skills when you work on strengthen, weaken, and necessary assumption questions in particular.

One of the best in depth look at flaw questions I have found is in the LSAT Trainer. Chapters 5 through 9 are all devoted to flaws. And if you want a quick rundown of some of the most commonly tested flaws, here’s a quick list.

After flaw questions, start tackling strengthen and weaken questions. One is the flip side of the other. They rely on the same skills, even though you may find that you personally do better with one than the other.

While you’re studying these questions, make sure you’ve mastered causal reasoning. Here’s a good resource for that.

These questions come next because making an unwarranted assumption is actually one of the types of flaws you would have studied when working on the flaw questions. Assumptions are also highly tested on the LSAT. But there’s usually more of a learning curve for these questions, which is why it often makes sense to tackle the strengthen and weaken questions first.

At this point, you would have studied five of the most prominent and most fundamental questions, all of which are based on flawed arguments.

Question Types #6 & #7: Must Be True and Most Strongly Supported

But Must Be True and Most Strongly Supported questions are not only prominent on the LSAT – they are also fundamental. They test your ability to make reasonable inferences on the basis of the information provided.

That’s also a fundamental skill on the Reading Comprehension section. Yet another vote in favor of tackling these question types early.

Principle questions are another big category of questions, so it makes sense to address them before getting into some of the more minor question types.

If you want an easy way to see how to prioritize, I recommend creating an account on 7sage. Even with a free account, you can input test scores, then view the analytics for those scores.

Navigate to “Analytics” in the top menu then select the tests you want to analyze (restrict yourself to tests you’ve done relatively recently). Scroll down the page until you see a chart like the one above. Either use this chart or the table below to identify what your next priorities are. (Just be aware that 7sage’s LR terminology may different a little from what you’ve seen in other books.)

The power of repetition

One more piece of advice. As you work through your LSAT Logical Reasoning questions by type, you’ll sometimes need to return to question types you’ve studied before. Especially if that question type remains frustratingly difficult to master.

Of course, don’t allow yourself to get stuck on it – there are still plenty of other question types where you can make progress. But sometimes we need to see a topic multiple times before we truly master it. That’s ok.”