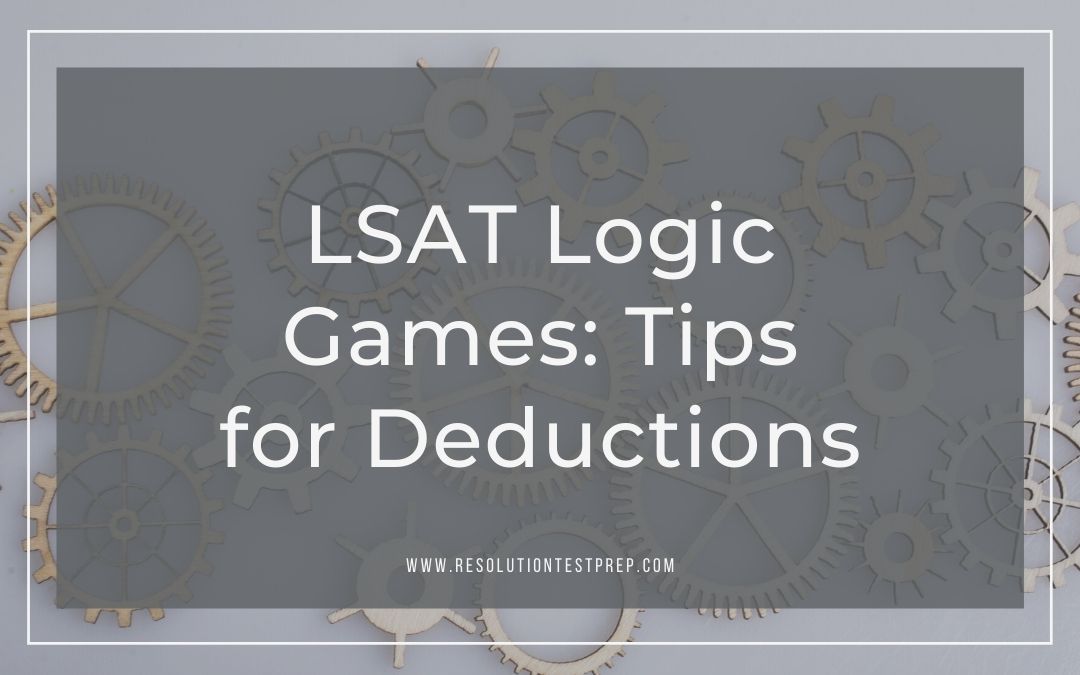 Read any book on LSAT Logic Games and you’ll find good tips for how to set up your diagram and how to sketch the rules. You’ll be instructed to make deductions of possible before heading to the questions. But there’s usually not enough discussion about HOW to find those deductions. Instead, it’s like they are just supposed to “come to you.”

Same thing with the questions. Students are taught that they’ll need to make deductions to get through the questions, but there’s little instruction on exactly what drives those deductions.

So my goal here is to give you LSAT Logic Games tips in the form of a list of places you can look for the deductions. It’s a list that I’ve refined over my years of teaching the LSAT. And it’s often one of the most useful things I share with my students.

Some of the deductions on the list are more common in some game types than in others. If so, I’ll point that out. And of course, it can still be tricky to know exactly what to pull from this list in any given situation. But my hope is that it will serve as a checklist of sorts for you.

When entities have to go together, there are often limited spots they could go. If you can narrow it down enough, you might be able to state the one or two only places the block could go.

Let’s say that J and K must be together in a group. That means you won’t be able to put them in any group that doesn’t still have two open spaces yet.

Let’s say that you have a rule stating that F must be immediately between P and S. That’s a block of three entities, so it can only go where there are three empty spots in a row.

In this case, you may not know exactly if the block is PFS or SFP, since the rule didn’t specify. But you do know it’s a block of three, and you also know F is the second entity in the block. So if you can pin down where you have three open spots in a row, you’ll be able to pin F down exactly.

If a single entity shows up in multiple rules, look for ways the rules may interact to limit your possibilities.

So for example, if S must be preceded by L and M, we can think of L and M as the leaders and S as the follower. We can’t put the follower as too close to the beginning because we need to save room for L and M. The earliest we can put S would be in spot 3. Similarly, we can’t put L and M too close to the end since they are leaders. The latest either one of them could go would be second to last, to save room for S.

[For more help with rules and diagramming in linear games, check out my three-part series on plain English explanations for linear game rules.]

As the name might imply, this is a deduction common to grouping games. It’ll also show up in in/out games, which are, after all, just a subset of grouping games.

The gist of this deduction is that once a group is full, all of the other entities get pushed to another group. It seems simple, but it’s actually quite powerful. If you have two groups, for example, filling one group means you know exactly who’s in the other group.

This deduction sometimes comes into play with partially full group as well. If you have a block of entities, and there’s just not space for all of them in one of the groups, then the block must go in another group.

If you’ve been diligently studying your LSAT materials, you’ve likely come across contrapositives. It’s important to remember that they are technically deductions. Write them down to make it easier to refer to them later.

This next common deduction can be pretty confusing for students in the beginning, and it often requires a clear understanding of formal logic and contrapositives.

So let’s start with a simpler case. Let’s say you have two groups and a rule stating that F cannot be with H. The only two ways to do this would be to put F in group 1 and H in group 2, or the reverse, with F in group 2 and H in group 1. Either way, you’d better make sure you keep a spot open for one or the other of them in each group. Notate this by putting F/H under each group so you don’t accidentally forget that you have a spot reserved for one of them.

A more complicated example involves formal logic. Let’s say you have an in/out game, with a rule stating that if K is in, P must be out. We can diagram that and the contrapositive as follows:

But let’s think about what this means and what it doesn’t mean.

Reserved spots can be a tricky deduction to learn, so let’s follow that up with an easier one: turning negatives into positives. When you have rules about what does not happen, think about what they may mean when translated into what may happen.

Perhaps due to deductions you made about leaders and followers, you may have a list of entities that cannot be in spot 1. Ask yourself who is left. If there are only a couple of entities left that could be in spot 1, it will likely be easier on your brain if you write down those two possibilities.

This last source of deductions can be a little tricky for students because it involves a little bit of math. But I promise that it’s not hardcore algebra. And I promise it’s worth it. Spotting these kinds of deductions when they happen often has a major payoff.

These deductions are typically found in grouping or in/out games. Essentially, what you want to be looking for here are any rules or game setup scenarios that offer limited possibilities for how entities might be distributed in a game. That sounds super abstract, so let’s look at an example.

Let’s say you have five entities and three groups, with a stipulation that no group can be empty. That leaves only a small number of possibilities for how you can distribute your five entities into the three groups. You might have one group with three people and two groups with one person each. 3+1+1 = 5. Or you might have two groups with two people each and one group with a single person in it. 2+2+1 = 5. There’s no other way you can sort five people into three groups.

If you want a good practice exercise for this, I recommend he drills in The LSAT Trainer Chapter 12: Numbers Issues.

My hope is that these deductions are useful LSAT logic games tips for you. If deductions are always difficult for you, consider keeping this list handy as you go through your next game. But be patient with yourself as well. It takes time and practice to get to the point where these deductions will flow naturally. But you CAN get there.