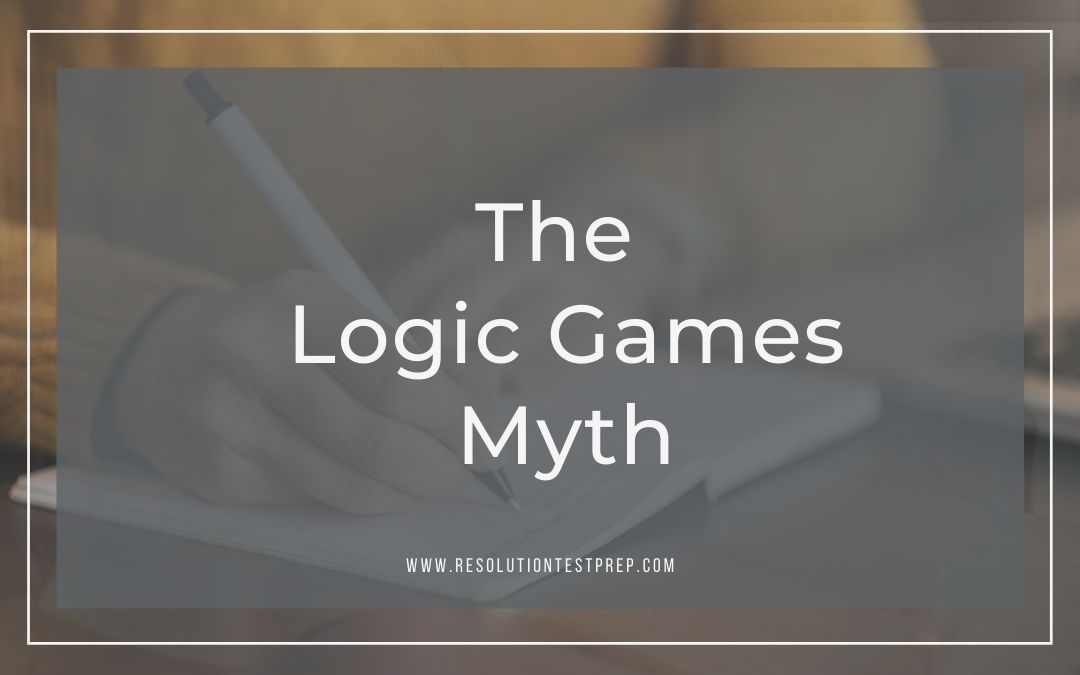 If you’ve been in the LSAT world for a while, you’ve probably come across this advice, which I consider to be the great myth about Logic Games:

Start with Logic Games. It’s the easiest section to learn.

Or the more extreme variation of it:

To get a good LSAT score, make sure you’re not missing anything in Logic Games. (It’s the easiest section to learn.)

Problem is, that’s not the best advice for all students. Sure, it works for some students, maybe even most. But it doesn’t work for everyone.

And there’s absolutely nothing wrong with you if that’s not the best strategy for you.

It just means you need to find the large-picture study plan that does work for you.

[Disclaimer: I’m not writing this to be discouraging or to say that Logic Games are hard to improve on. My purpose here is actually to encourage you. To give you permission to start with whatever makes the most sense for you. To allow you to play to your strengths rather than getting frustrated if a common piece of advice doesn’t apply to you. I’m not saying to neglect the games. But maybe you don’t need to start with them. And maybe you don’t need to fully master them before you move on to another section. Maybe you don’t even need to master them at all to get the score you want.]

The origin of the Logic Games myth

The advice to start with the games and focus on mastering them is well-intentioned. And it is the right choice for many students for a couple of reasons.

Most students come to the LSAT without any background in solving logic puzzles. Reading Comp, on the other hand, is familiar from other standardized tests, and Logical Reasoning has some definite overlap with Reading Comp, so it doesn’t seem as unfamiliar as the games do.

Because of that, it’s often easy for students to make some quick gains in the Logic Games section just by learning what the section is all about. Most people can learn some strategies for diagramming, get a feel for how to answer the questions, and make some quick improvement from where they started.

Another reason people suggest focusing on Logic Games is that it’s the most black-and-white section on the test. It’s kind of like math, where there are clear right and wrong answers. On the rest of the LSAT, it can often feel like there’s more interpretation involved. It can be hard to get to the point where Logical Reasoning feels black-and-white. (You can, though. And you should, if you are shooting for a 170+.)

The black-and-white nature of the games section is what leads some people to the advice of working on games until you can do the section perfectly.

Unfortunately, that advice isn’t the best for everyone.

When the advice about Logic Games is a myth

Recently, I’ve talked with a few students who were convinced that they needed to start with logic games, only to get totally stuck. They spun their wheels for months, not really making progress. Eventually, thank goodness, we were able to get them unstuck. But I’m sure there are other students out there who just stay stuck.

Here are some warning signs that might suggest you should back off a bit on Logic Games, at least for the time being.

Some people approach the games as something that is learnable and figure-out-able, while other students have the first impression that it’s basically gibberish. (If you’re in the latter camp, I’d recommend this article on the importance of a Growth Mindset in LSAT prep.)

If you can already tell that Logic Games is just not your thing and is unlikely to ever become your thing, then focusing on logic games and only logic games has the real potential to affect your motivation to study. You may find yourself losing confidence in your ability to get the score you need. And you may even start skipping study sessions because you’re feeling discouraged.

So if you ever feel like working on logic games is preventing you from getting some good forward momentum in your studies, feel free to work on something else. You can always come back to the games later on once you’ve built up your confidence on the other sections.

Some students, simply speaking, find Logic Games hard and “unlearnable.” There’s nothing wrong with that. It just means that you either need to find a way to change your way of thinking about the section or you need to play to your strengths by focusing on the other sections.

For some students, Logic Games brings up limiting beliefs like feeling that you’re “bad at it” or “will never get it.” These beliefs are part of a fixed mindset, and luckily, it’s possible to work on shifting to a growth mindset instead.

But for some students, the problem goes beyond mindset. I worked with one student diagnosed with dyscalculia, a learning disability in math that you can kind of think of as being the math equivalent of dyslexia. This student had learned all the rules for diagramming games. She knew her contrapositives. She knew how to set up the sketches. And she knew the differences between Must Be True and Could Be True. But when it came to actually executing the games, her dyscalculia made it incredibly challenging for her to use her diagrams to see what logical deductions she could make to work step by step through a question.

That doesn’t mean all hope was lost for this student. We were able to make some hard-earned gains in the section. But the advice of “Start with Logic Games. It’s the easiest to improve” was absolutely wrong for this student. Not to mention damaging to her self-confidence. Fortunately, she recognized the source of her difficulties and made sure to prioritize mastering the other sections of the LSAT to give her the wiggle room she needed in the games.

Many people assume that it’s easiest to make gains in the Logic Games section, but sometimes you can make easier gains elsewhere. These kinds of situations usually arise when a student needs to make a massive mental shift in their thinking about a section as a whole.

For example, I spoke with a student who went from getting literally 0 questions right in reading comp to getting 18 right in just about a month. This student had been obsessing over needing to understand everything in the passages. And as a non-native English speaker, he was getting bogged down in the vocabulary he didn’t know.

Once he committed to being OK not understanding everything, to looking for the structure of the passage rather than the content, and to thinking through what the questions were asking him to do, his accuracy on RC rapidly increased.

I’ve also had a student start with a literal 120 on the LSAT. His first major jump into the 140s came from just getting more familiar with what arguments were and what kinds of things the LSAT was asking him to do on the Logical Reasoning section.

If you’ve been working hard on Logic Games but are feeling frustrated, burnt out, discouraged, or unmotivated, there are a few ways you can address the situation. Some of these solutions might involve shifting focus away from the games:

But the solution may involve dealing more with the feelings of frustration and burn out:

It’s up to you to think carefully about what solution is best in your particular situation. If you want to talk it out with someone, please reach out. Sometimes that’s all you need.