How long does LSAT prep take? 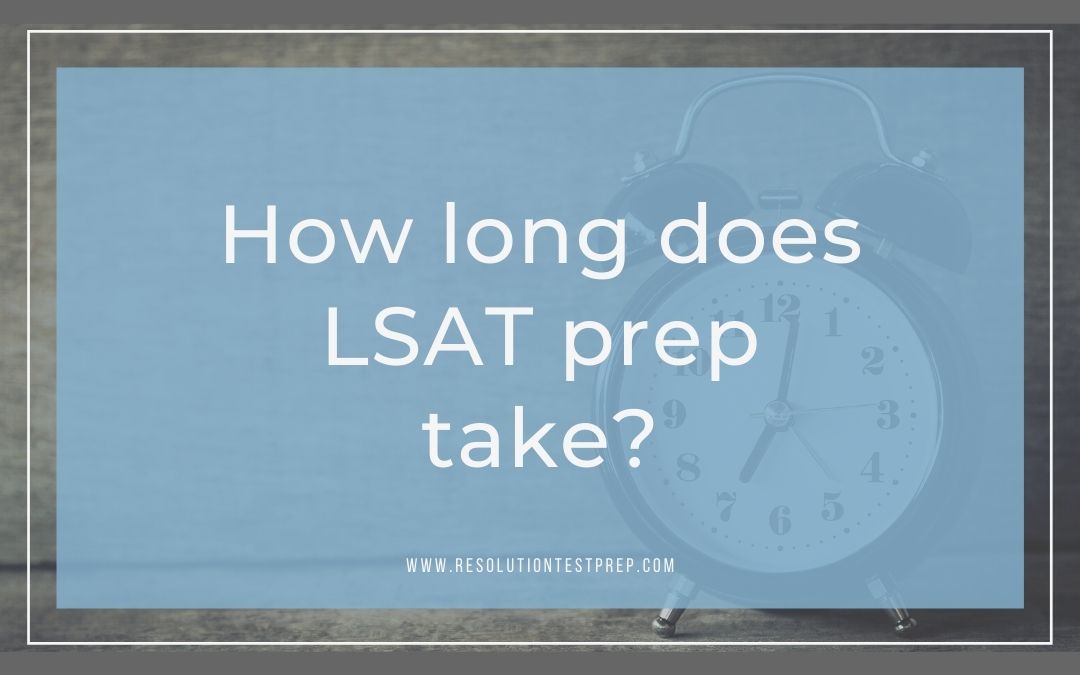 I’m going to tell you something here that not many LSAT prep companies are willing to admit. And I’m telling you it at the risk of making myself look like a bad or ineffective tutor. But it’s the honest truth about how long LSAT prep actually takes.

Prepping for the LSAT can take a long time. Like, a really long time.

And it’s not like I don’t have those stories to share. One of my most impressive success stories was a student who came to me with a literal 120 on his diagnostic. We met every other week for 4 months, and by the end of that short time, he was scoring 158 on practice tests.

But is that typical? Unfortunately not.

I tell you this not to be discouraging but because when you’re dealing with something as big as the LSAT, it’s important to make sure you know what’s typical so that you don’t lose heart if your story doesn’t end up being the super amazing success story shared front and center on a tutor’s website.

So my goal here is to prevent you from getting discouraged, burnt out, and wanting to give up. And I want to encourage you to keep at it, to understand that everyone progresses at different rates, and to accept the timeline you’re on.

So here are a couple of real student stories, with the struggles and the delays included. And the happy endings.

I worked with one student a couple of years ago who was definitely a deserving student. He wanted to go to law school in part because of the discrimination he had witnessed post 9/11. He was a hard worker and did his best to make sure he understood every question he did.

But he also suffered from awful chronic migraines. His migraines prevented him from studying as much as he wanted, and unfortunately one of them hit on the day of his LSAT. The medication he took wasn’t enough, and he ended up with a 144.

The score did not reflect his true ability, but he applied with it anyway… only to get rejected from the two schools he applied to.

He then took a couple of months off, did some self-study, and ended up with a 151 (still lower than some of his practice tests, but a lot better than the 144.) He’s now choosing between a couple of offers and will start school next fall.

A flight to Florida

I worked with another student from Brazil who wanted to attend law school in the US. He came to me after self-studying for a while and was scoring around a 155. His goal was to get into the 80th percentile.

We worked together for a few months, and he was scoring a little above his school by the time his test day in October arose.

But on the day of his test, he got thrown off by a difficult game and a tricky reading section and ended up seeing a significant drop back down to a 157.

He decided to retake the test the next month. The only problem was that the test wasn’t even offered internationally for November. So he bought a plane ticket to Florida to take the test there.

We worked hard to get him even more prepared and made sure to prepare for the psychological element of the test as well. He flew to Florida the day before his test, then returned home to wait for the results. And he ended up with a 161, which got him into the 80th percentile just like he wanted! He also was offered a 75% scholarship to his top choice law school in Florida. So his gamble to spend the money to take the test in Florida paid off.

In the students I’ve had who have made it into law school over the years, there’s one common thread. When (not if, but when) the setbacks occur, these students don’t give up. They may take a short break in their prep, and that’s fine. That can be a great way to deal with or prevent burnout. But then they come back to it determined to do better. For these students, the answer to the question “How long does LSAT prep take?” is “As long as it takes. But I WILL succeed.”

In fact, I often start working with students right after one of these setbacks, since that’s when many students decide to make changes to how they are prepping for the test. We work together to figure out what led to the setback and what we can do together to overcome it.

The need for resilience and determination is one of the reasons I’ve found myself incorporating more and more conversations about mindset in my work with students. It’s now part of my LSAT teaching philosophy. We talk openly and without judgment about times when the student may feel discouraged or anxious. We talk through the emotional and psychological side of low practice test or actual test scores. And we work together to create a game plan to come back from that setback.

It’s my belief that all students have the ability to learn the LSAT and get the score they want. It might not be a fast or easy process, but it’s achievable. You’ll need patience, determination, and resilience. And oftentimes it’s easier when there’s someone in your corner rooting for you and helping you get back in the ring.