Why grouping games feel harder and what to do about it 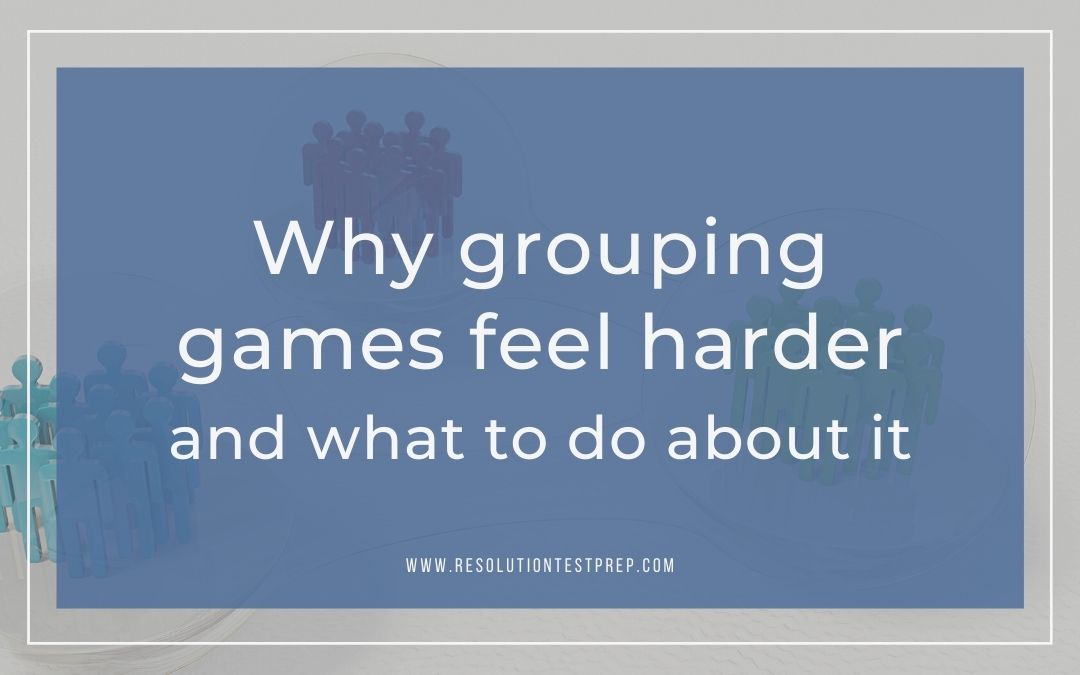 Many of my LSAT tutoring students at the moment are in the early stages of their prep, which means a lot of focusing on the fundamentals, especially in Logic Games. One of the common complaints I’ve been hearing is that the grouping games feel a lot harder than the linear (or sequencing games). So I wanted to share my thoughts about why this may be the case and what to do about it.

What are grouping games?

First, a general definition. Grouping games are ones that ask you to sort entities into categories. You may be grouping children into teams for field day, or perhaps you are sorting flowers into three different zones in your garden. You may be told how many children or flowers go in each group, or that may be flexible, but regardless, it’s all about sorting into groups.

Linear games, by contrast, involve a different type of sorting. Here, you’re ordering the entities. You’ll have words like “before,” “after,” “first,” “last,” and “position 3.” You may be ordering people by age, or books by where they appear on the bookshelf. Occasionally, you’ll have a twist, like two entities that can occur together (ex: two people with the same age). But despite the twists, it’s all about putting things in order.

Why do grouping games feel harder?

We can see this in both the general setups and in the rules. In the rest of this post, we’ll discuss these two topics separately, and I’ll give you some suggestions that have helped my students deal with these difficulties.

Even though grouping games all involve sorting entities into groups, there is a lot of variation on the LSAT about how exactly that takes place.

We’re almost always told how many groups there are, but we may not be told how many entities fit in each group. In some games, the groups may be all the same size, but in other games, one group might be bigger or smaller than another group. You may be told explicitly that one group is always bigger, or it may vary.

Here are some examples:

“A class of 9 students is to be divided into three groups of three students each for a group project. The groups are the Shakespeare group, the Chaucer group, and the Beowulf group.”

In this case, we know the size of each group and the groups are all the same size. And mathematically, it all works. Three groups x three students each = our 9 students.

“A class of 9 students is to be divided into three groups for a group project: the Shakespeare group, the Chaucer group, and the Beowulf group. Each student must be assigned to only one group, and each group must have at least one student. The Shakespeare group is larger than either of the other two groups.”

In this case, we don’t know the sizes of each group, but we do know that the Shakespeare group is the big one.

“A class of 9 students is to be divided into three groups for a group project: the Shakespeare group, the Chaucer group, and the Beowulf group.  Each student must be assigned to only one group, and each group must have at least one student.”

In this case, things are less defined. The groups might be the same size, but they might also be different. And if they are different, it seems like any of the three groups has the potential for being the big group. It’ll probably change, question by question.

“A class of 9 students is to be divided into three groups for a group project: the Shakespeare group, the Chaucer group, and the Beowulf group.  Each student must be assigned to only one group.”

Here, we don’t even know if every group has a student in it. Maybe no one signed up for the Beowulf group and so it’s empty.

Another aspect of the setup for many grouping games is that we may also be allowed to repeat entities. In other words, we could have a person join one group, multiple groups, or even no groups.

“Sally, Thomas, Ursula, William, and Xavier are eligible to sign up for extracurricular activities. The activities offered are soccer, band, and debate. Each student must sign up for at least one activity.”

The “at least one” makes a big difference here. (Compare to the “Each student must be assign to only one group” in the group project examples above.) Here, we can have Sally join one, two, or three different activities. We don’t know how many times we’ll be adding her to our diagram, unless rules or a question stem tells us.

Here too, we can have a person assigned to multiple groups, although we’re prohibited from having that person join all three extracurricular activities. But the bigger twist here is that “at most two” includes zero. So we can also have someone decide to join NONE of the activities.

How to deal with grouping game setups

With all of these variations, it’s important to go into grouping game setups armed. You don’t want to not notice that a group can be empty or that entities can be repeated, for example.

Here’s a checklist of questions I give my students so that they can walk themselves through the possibilities:

If you routinely ask yourself these questions during the setup stage, you’ll set yourself up for success because you’ll better notice the possibilities that would otherwise be easy to overlook.

So far, we’ve been talking about how the setup of grouping games often makes them seem harder than linear games. The rules are the second major source of difficulty.

Grouping games tend to have far more conditional reasoning rules than linear games do. Even if you’re great at diagramming formal logic and forming your contrapositives, the conditionality of the rules can lead to some difficulty.

Rules like “H and G must be together” or “P is either in spot 1 or spot 7” apply globally. You never have to ask yourself whether that rule is active or not in a particular question because they are always active.

It can be difficult for students to think through which rules are active and while rules don’t apply in a particular question. Especially if you have five or six conditional rules in a game.

Some students are tempted to apply the rules backward. (In the example above, that would mean seeing T in Zone 2, and assuming that W must have been in Zone 1. When actually, T being in Zone 2 makes the rule irrelevant, so W is free to do whatever.)

Other students get stuck in seemingly endless loops checking and double-checking if they’ve applied all the rules. They check the rules, check the contrapositives, and then double check them all if they’ve found that anything gets triggered. They leave each question not knowing if they applied the rules right.

How to do deal with it

If you have multiple formal logic rules, line up the arrows so that you can basically scan down the list. Anything in the left-hand column before the arrows is a trigger. You can then scan that list of triggers to see what applies in a question.

Scanning in this way helps reduce the temptation to read the rules backward.

And to help you deal with the difficulty of knowing when you are actually done applying the rules, I’d like to share a flowchart I created for a student recently. 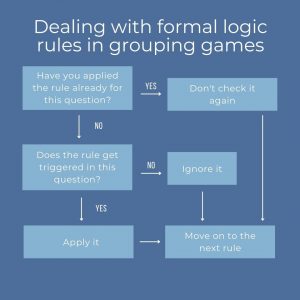 Basically, here’s how it goes:

That last point about moving on to any rules that haven’t been applied yet may mean returning to a rule that you skipped before since it wasn’t triggered yet. If the rule still doesn’t get triggered, then you can fully and safely ignore it for the rest of the question. That rule is not in play for this question.

Once you’ve either applied each rule or determined it to be irrelevant for the question, you’re done with that rule and you don’t need to keep checking it.

If you’ve found this discussion of grouping games helpful, I’d suggest creating a flashcard or a post-it note with some of the tips that resonated with you the most.

Then try out a couple of grouping games with these notes in front of you. Actively work on applying these strategies to the game, and see if that helps.

And if you still feel stuck, no shame. No one was born knowing how to do logic games, and it takes some getting used to. I’d invite you to schedule a free consultation so we can troubleshoot together and get you on the path to achieving your LSAT goal.