How to diagram linear games (in plain English): Part 3 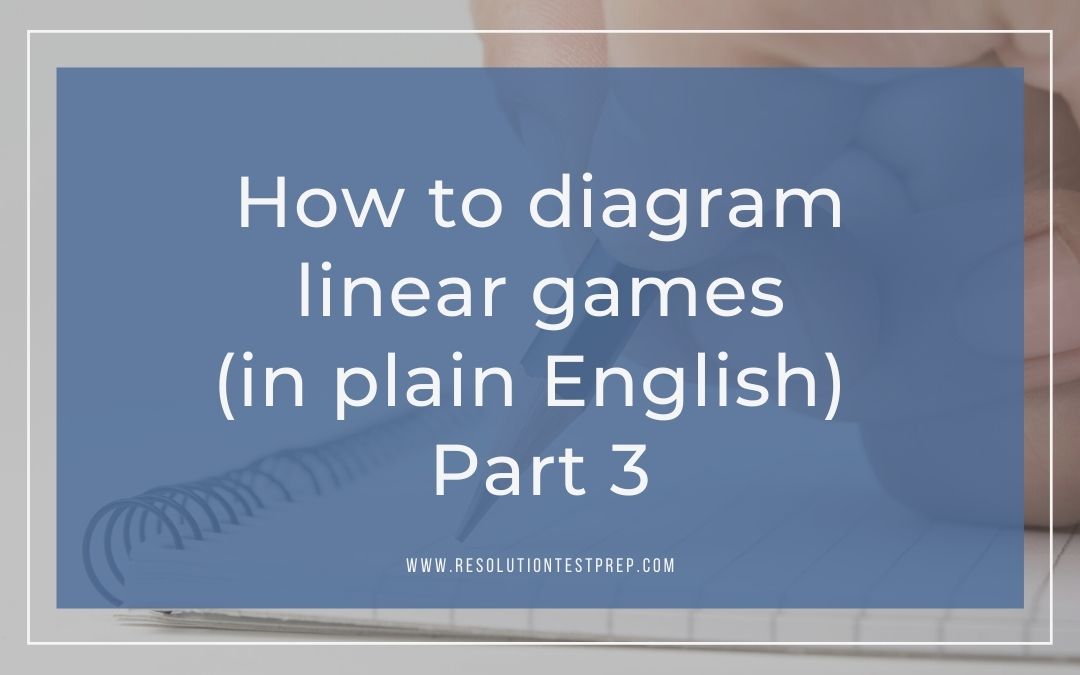 This post is part three in a series on how to diagram linear game rules. The goal is to give you “plain English” explanations of challenging LG rules so that you can diagram them with confidence.

Take me back to Part 2

This post assumes that you’ve had an introduction to how to diagram formal logic and how to form the contrapositive. If not, you might want to get that background and then come back. Khan Academy has a good introduction in the Logic Toolbox section of their free online LSAT course.

But here’s a quick note about the contrapositive, since it can be tricky for students. Remember that the contrapositive of a formal logic statement is another statement that is logically equivalent and therefore also true. In plain English, it’s something else that we know to be true.

Consider this sentence: “If I miss the train, I’ll be late to work.” What we also know is that if you weren’t late to work, you must not have missed the train. That’s the contrapositive.

Miss the train → Late to work

Not late to work → Didn’t miss the train

A word of caution

Be careful about what triggers what. It’s tempting to read these backward sometimes.

What if I was late to work? Do you KNOW that’s because I missed the train? Not really. Maybe I caught the train, but then decided to get coffee after exiting the train, and that’s what made me late to work. Or maybe I was late because I just didn’t feel like showing up on time. It’s not right to assume that Late to work → Miss the train.

Rule 3a: If Samuel is before Jacqueline, then Marco must be after Liu.

We’re starting out here with a relatively straightforward conditional rule. We’ll build on it as we get further into this post.

In other words, anytime we see Samuel before Jacqueline, we’ll also need to have Marco after Liu.

We can diagram the rule like this, using an arrow to represent that the first half will trigger the second half:

The steps to forming the contrapositive is to swap the sufficient and necessary conditions (swap the if and the then parts of the sentence) and negate them.

We can also think about this in plain English too. It just might require you to really think about it for a bit. (If it gives you a headache right now, keep thinking about it. Come back to it. Eventually it will click. It just takes time.)

Contrapositive Sufficient: Marco is not after Liu.

Contrapositive Necessary: Samuel is not before Jacqueline.

Some students stop there because they’ve been trained to form the contrapositive by swapping the order and negating the elements. But we can do better.

Think about what it means for Marco to not be after Liu. Assuming no funny business like they can be at the same time, this means that Marco is before Liu. And Samuel being not before Jacqueline means that he’s after her.

So we really get this:

We can diagram it this way:

Rule 3b: Samuel is before Jacqueline only if Marco is after Liu.

The formal logic phrase here is “only if.” This one can be a tricky one for students because the “if” in it is misleading.

How to treat “only if”

This means the “only if” actually signals the necessary condition rather than the sufficient.

To deal with it, replace “only if” with a “then.” Then add an “if” to the other part of the sentence.

“If I buy you dinner, then it’s your birthday.”

That’s exactly what we had in Rule 3a, so we’ll diagram it and the contrapositive the same as before:

We’ve got a twist here with the “immediately before.” But it’s nothing we can’t handle.

We’ve been signally “before” and “after” with dashes. So we just need a different way to indicate that something is right before, not just somewhere before. You’ll see many prep books doing that by just not using the dash. Just shove those two letters together. Some prep books emphasize the relationship a little more by putting the two letters in a box together to show that no one can get in between them.

So let’s do that, first by starting out listing the sufficient and necessary conditions.

We’ll follow the same steps as before, swapping the sufficient and necessary conditions and negating them.

Contrapositive Sufficient: Liu is not immediately before Marco.    not LM

Contrapositive Necessary: Liu is not before Marco.  not L – M

But we can simplify the necessary condition a little. We know that Liu not being before Marco means he has to be after Marco. So we really get this:

Contrapositive Sufficient: Liu is not immediately before Marco.    not LM

Advanced mode: Getting to the heart of the rules

Let’s return to the original rule 3c: If Liu is before Marco, he must be immediately before Marco. We diagrammed that as the following:

But we can do better. Let’s think about what it really means by thinking about OK and Not OK scenarios (the technique we used in Part 2).

So our two possibilities here are that the rule gets triggered (putting Liu right before Marco) or the rule doesn’t get triggered (because Liu is after Marco).

This reinterpretation won’t always work though. It only works here because both halves of the conditional were about Liu and Marco. It didn’t work in Rule 3a or Rule 3b because we also had Samuel and Jacqueline involved so there wasn’t any overlap between the sufficient and necessary conditions.

Rule 3d: Samuel must be immediately after Jacqueline unless Liu is before Marco.

“Unless” can cause major problems for students. It’s honestly the most confusing formal logic word for most students.

How to treat “unless”

The trick is to treat an “unless” like an “if not.”

So we can reread this rule as “if Liu is not before Marco, then Samuel must be immediately after Jacqueline.”

Sufficient: Liu is not before Marco.

Necessary: Samuel is immediately after Jacqueline.

Just like before, we’ll translate Liu not being before Marco as Liu being after Marco. So we get this:

Necessary: Samuel is immediately after Jacqueline.  JS (in a box)

Let’s do the same swapping and negating as before.

Contrapositive Sufficient: Samuel is not immediately after Jacqueline.

Contrapositive Necessary: Liu is not after Marco.

Contrapositive Sufficient: Samuel is not immediately after Jacqueline.   JS in a box crossed out

So here’s how we’d diagram the contrapositive:

Samuel must be immediately after Jacqueline unless he is before Jacqueline.

Send me a message to check your answer.

Didn’t catch the either parts of this series? Go back and catch up.

Take me back to Part 2