How to diagram linear games (in plain English): Part 1 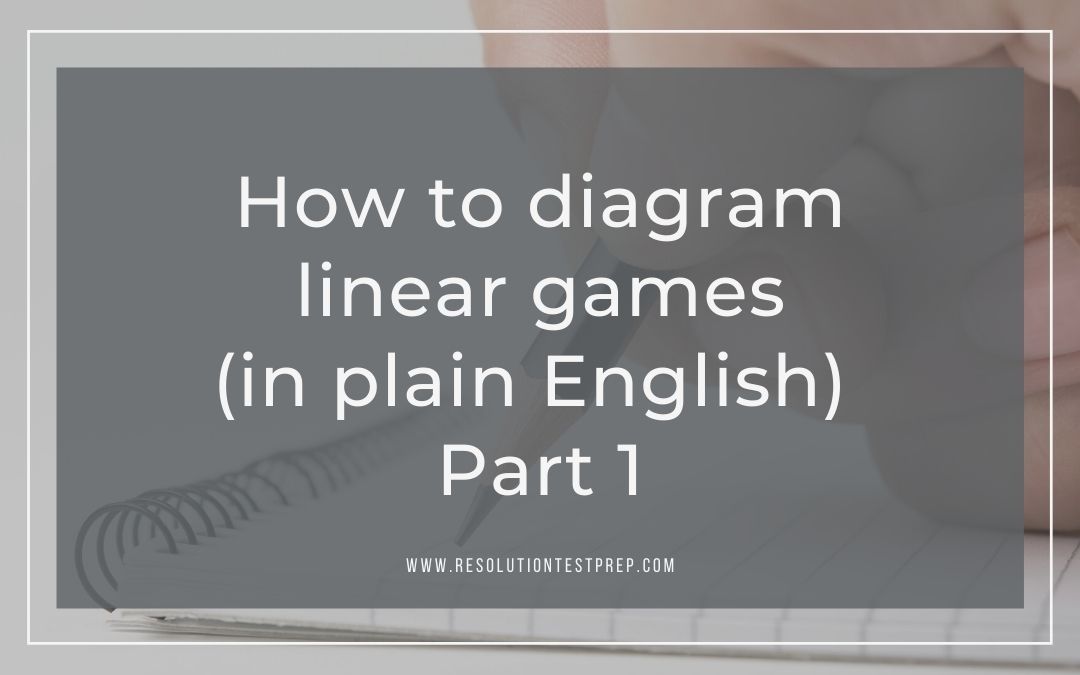 This series of articles comes as a special request from a student looking for “plain English” explanations of how to diagram LG rules. So if you’ve found the explanations in prep books to be dense and confusing, read on. We’ll look just at how to diagram the rules found in linear (otherwise known as sequencing) games here.

And even if you feel you’ve got a pretty good handle on the basics, I’d still encourage you to read on. There are always nuances to perfect, and having a good grasp on what these rules mean in real English rather than LSAT-ese can be invaluable.

Here are the rules we’ll cover.

Take me to Part 2

Before we jump into the rules, let’s get on the same page about your general task in linear games. These are games about putting entities (people, plays, robots, whatever) into some sort of order. Often, we can represent it best by lines in a row:

You can put numbers under the lines if you want, to remind yourself which spot is 1st, 2nd, etc. That’s helpful if you have to put eight or nine things in order:

Drawing the lines horizontally usually makes things easier, since your answer choices will also list things horizontally. But sometimes, it makes more sense to arrange things vertically. For example, you might be assigning people to floors in an apartment building or putting books on the bottom, middle, and top shelf:

Whether you choose to work horizontally or vertically, make sure that when you are diagramming the rules themselves, you make use of the horizontal and vertical space in a meaningful way. What that means is that if you are putting people into apartment floors, and you get a rule like R is above B, write your rule vertically with R above B on your scratch paper.

It’s easy to get mixed up when our job is to order things from “most to least popular” or “closest to the library to farthest from the library.” After all, if chocolate is the “most popular,”  does that mean it should go in spot 1 or spot 9?

The setup paragraph should give you a clue. “Most to least popular” means to start with the “most popular” in spot 1. I personally find it super helpful to write that on my diagram:

Rule 1a: Usain finished the race 3 spots in front of Carl.

The trick here is to think about how many spots are between Usain (Bolt) and Carl (Lewis). Are there three spots between them? Two spots? Four spots? It’s a bit confusing to think that way, in my opinion.

The easiest way to think about it is to come up with a scenario. Let’s say Usain finishes 2. If he’s 3 spots in front of Carl, that should make Carl 5th, right? That’s the most natural thing for the English to mean.

What this diagram shows us is that there are two spots between them. At this point, we can erase the U and C from spots 2 and 5 (after all, we were just playing around with that to think the rule through). We’d be left with this in our rules:

This rule might trigger some great deductions. Since Usain is so much better than Carl, we need to make sure we put him in a spot close enough to the beginning that we still have room for straggler Carl. We can’t put him third from the end, for example, because we’d run out of spots by the time we get to Carl. The reverse is true too. We can’t put Carl so close to the beginning that there’s not enough space for Usain.

Here’s a blog post with more resources for deductions.

Rule 1b: Usain finished the race at least 3 spots in front of Carl.

This one is a little more complex than the last. Let’s play around with it again. Since it says “at least 3 spots,” then Usain could also be 4 spots ahead, 5 spots ahead, 6 spots ahead, etc. So if Usain finishes 2nd, then three spots later would have Carl in 5th place. Just like we had before. But Carl could also be in 6th place, or 7th place, etc.

If we use the same diagram as before, we’d forget those other possibilities. So we want to build that idea of “at least 3 spots” into our diagram. An ellipsis (…) is one way to do that:

The way to interpret this diagram to yourself like this: “Make sure you have at least two people between fast guy U and slow guy C, but you can also have more than two between them.”

Rule 1c: Usain finishes before Carl, and at least one other person finishes between them.

Luckily, this version of the rule shouldn’t be too bad, now that we’ve done the other variations. This rule has two parts:

So we’d start with U – C, Usain before Carl. But then we’d make sure that there’s at least one person (and maybe two, maybe three, maybe more) between them. Basically, the thing we CAN’T do is have U right before C with no one in between.

We could sketch it this way, similar to how we did with the last rule:

In plain English, we’d want to remind ourselves that U comes before C but just not directly next to C.

Send me a message to check your answer. (Hint: You’ll probably want to use U/C to indicate that either Usain or Carl could go in a spot.)

Take me to Part 2